Philip Roth’s altered image of America’s past in The Plot Against America is a stroke of genius, says Blake Morrison

When the hubristic, newly elected US president boasts of America’s invulnerability to foreign attack, the sense of imminent calamity is overwhelming. The title invokes 9/11, but the novel is set 60 years ago. The plot against America isn’t Islamic but homegrown (with a little assistance from Germany). And instead of reconstructing real historical events, as David Hare does in Stuff Happens, Philip Roth offers something bolder: a reconstruction of imagined events, a “what if…?” that reads like a “what really happened”.

Just suppose…that the air hero Charles Lindbergh, the man who made the first solo transatlantic flight in 1927, who earned huge sympathy when his baby son was kidnapped and murdered five years later, who called Hitler “a great man” and was decorated by order of the Führer for his services to the Reich, just suppose that he’d taken up Republican invitations to run for president in November 1940, and milked the isolationist sentiment that undoubtedly existed then (No more war! Never again will young Americans die on foreign soil!), and that instead of Roosevelt being elected for an unprecedented third term and taking America into Europe to fight the Nazis, Lindbergh won a landslide victory. And then he signed non-aggression treaties with Germany and Japan, and set about realising his vision of America as a land of the brave and blond, and introduced a set of anti-semitic measures which, if not on the scale of Hitler’s pogroms, were a betrayal of the rights and liberties enshrined in the constitution and yet, such was the young president’s charisma, they were accepted by the mass of ordinary citizens and even by some prominent Jews.

Just suppose…that the princes in the Tower hadn’t been murdered, that Britain had remained a republic after Cromwell, that America had turned fascist in 1940. In most hands, “just suppose” is a parlour game, a high-table diversion, whimsical and ultimately trivial. Not with Roth. His stroke of genius – and, given the extraordinary late blooming of an already illustrious career with American Pastoral, I Married a Communist and The Human Stain, the word genius doesn’t seem excessive – is to bed his little fantasy in the rich soil of his own childhood in Newark, New Jersey, and watch it grow. The narrator is Philip Roth, aged seven, and the family at the book’s centre are his family – father Herman, mother Bess and brother Sandy. The Roths understand the threat posed by Lindbergh, as do their Jewish neighbours, but each member of the family responds differently. Early on, there’s a trip to see the sights of Washington, where the Roths find their pre-booked hotel room has become mysteriously unavailable. A blatant case of anti-semitism, Herman shouts, and a violation of the Gettysburg principle that “All men are created equal”. But his loudmouth protests embarrass Bess and silence their voluble tour-guide. Already there’s a pressure to pretend not to see what’s going on. Further frictions arise when, under the auspices of a scheme called “Just Folks”, Sandy disappears for the summer for an “apprenticeship” with a Kentucky tobacco farmer. A talented young artist, he returns with a portfolio of animal sketches – and a sudden enthusiasm for Waspish, heartland values. Worse, he’s co-opted by the OAA (the Office of American Absorption) to encourage other Jewish city boys to follow his example – and does it so well that through his aunt, Bess’s sister Evelyn (whose boyfriend, Rabbi Bengelsdorf, is a passionate supporter of Lindbergh), he’s invited to a reception at the White House. A fierce row ensues, with Herman refusing Sandy permission to attend and Evelyn and the rabbi defending Lindbergh as a freely elected democrat “who has exhibited not a single inclination towards authoritarian rule”.

In noisily denouncing Lindbergh, Herman is made to feel like a “frightened, paranoid ghetto Jew”. Paranoia is a common issue with Roth’s narrators, who’re frequently told they’re imagining or exaggerating things – there’s a memorable scene in The Counterlife, when a woman in a London restaurant complains to the waiter of the terrible smell in the place and the hero, Nathan Zuckerman, tells his disbelieving gentile wife “I am that stink”.

The thesis of The Plot Against America is paranoid, too – a fascistic US government suspending civil liberties and persecuting minorities deemed a threat to security. Paranoid and yet (even without any allusion to America post-9/11) utterly plausible. To make alternative history credible, you have to register the incredulity of those it’s happening to. “We knew things were bad,” Herman tells friends after his hotel experience in Washington, “but not like this. You had to be there to see what it looked like.” Later, after Von Ribbentrop is warmly greeted at the White House, Herman says: “If I didn’t see it with my own eyes, I’d think I was having a hallucination.” Or later still:”It can’t happen here? My friends, it is happening here.”

What unfolds requires some tweaking of the historical record – the postponement of Pearl Harbor by a year, for instance. But so inevitable is the march of events that this is all it seems, a tweak. It helps that we see things through the eyes of a child. The man the child became can look back at what was lost (“that huge endowment of personal security I had taken for granted as an American child of American parents in an American school in an American city in an America at peace with the world”), but the child, in medias res, is preoccupied by matters other than politics: his stamp collection, for instance; or how his Aunt Evelyn, holed up in the cellar, will get through the night without access to a toilet; or what to make of his repellently fascinating cousin Alvin, who has come home from the war in Europe minus a leg. But even those postage stamps lose their innocence. Philip dreams of their national park icons being covered by swastikas, and when the collection is eventually lost, anti-semitism is directly to blame: under the new Homestead 42 scheme, the Roths have been “selected” for relocation to Kentucky, and it’s while running away in the middle of the night to avoid exile that Philip mislays his most treasured possession.

As it turns out, the Roths avoid the ultimate catastrophe. But Philip’s worst-best friend Seldon is less fortunate. There’s a hauntingly familiar moment when Seldon, at home alone in Kentucky when his mother Selma fails to return from work, is given painstaking instructions by Philip’s mother over the phone from Newark on how to make himself toast for supper. Seldon fears the worst (“Now both my parents are dead”) and he’s right to. By this point, two years into Lindy’s presidency, killings and riots have begun and many Jews are fleeing over the border into Canada. The nadir is the assassination of the Jewish journalist and broadcaster Walter Winchell, a prominent critic of government policy. In truth, as we learn from Roth’s postscript, Winchell lived on for 30 more years. But the alternative history which Roth imagines for him, including a detailed account of his vast funeral in 1942, seems more realistic than the reality of Winchell becoming a McCarthyite in the 50s and dying in obscurity.

The postscript, with its short biographies and list of sources, gives us the facts – the ground on which Roth has built his house of fiction. It’s instructive yet also redundant. What matters isn’t the reality that underpins the novel, but the reality it creates for itself. And The Plot Against America creates its reality magisterially, in long, fluid sentences that carry you beyond scepticism and with a quotidian attentiveness to sights and sounds, tastes and smells, surnames and nicknames and brandnames – an accumulation of des petits faits vrais – that dissolves any residual disbelief. 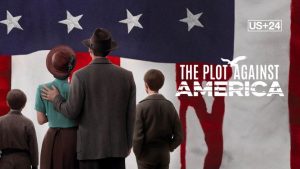 Young Philip’s greatest epiphany is to recognise the difference between history as taught in school – harmless and inevitable – and history as it’s lived through, “the relentless unforeseen”. His novel is a different kind of history again, an imagined past which, if we learn from it, might save us from a calamitous future. It’s not Roth’s funniest novel (and there’s hardly any sex). But in its sweep and chutzpah, it ranks with his great trilogy of the late-90s. Isn’t it time they gave him the Nobel?